Who Pays for ISC’s Open Source?

Open source software is free for the user, but developing it does cost money. Our software systems are large and complex; the developers are doing a professional job like any other software development job. Most of the money to support these projects comes from revenues from software support. This totalled $4,165,726 in 2015 and $4,187,219 in 2016*. We also receive some funding in the form of grants or small donations, generally less than about $200K per year. ISC is non-profit: we spend this money to maintain our software and deliver the support services.

Only a very tiny percentage of our user base supports us financially. In 2016 we had 106 support subscribers. We don’t really know how many users we have, but most of our maintenance releases are downloaded from ISC between 10,000 - 30,000 times, and we know that many users get our software from other sites or in other packages. The organizations who pay ISC for software support are helping us to develop the open source for everyone, and many of them subscribe just in order to support open source.

ISC sells annual software support contracts to a wide array of organizations. The two pie charts below illustrate the approximate percentage of our overall support revenue that comes from each of the segments.

Service providers, including cable and mobile access providers as well as traditional carriers, provided most of our support in both 2015 and 2016. The next most significant customer segment is developers of commercial products that incorporate our open source, which we refer to as “OEMs.” ISC open source is incorporated into many commercial and open source products, including applications, embedded devices, and operating systems. 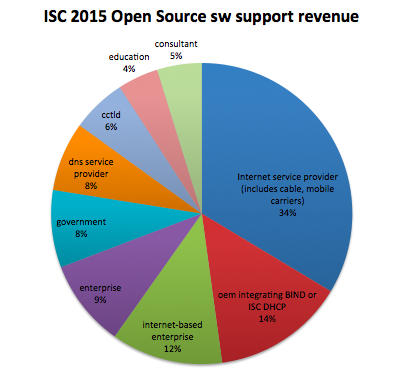 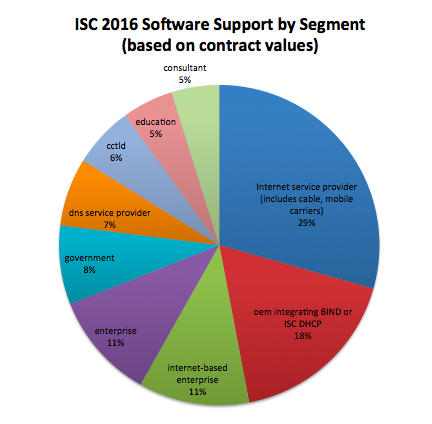 The revenue percentages are not indicative of the number of support customers in each segment. We provide different levels of support, ranging from Advance Security Notification only, to 7x24 support with SLAs, and we charge small and non-profit organizations less than larger commercial organizations and service providers. In 2016, for example, our 8 subscribing OEMs provided us with more support than the 13 ccTLDs, 10 educational organizations, and 8 consultants combined.

Where in the world does the ISC’s open source support come from?

We believe we have a lot of open source users outside the US and Europe, based on the apparent location of people downloading software from our website. Not surprisingly, subscribers in the US and Europe are subsidizing the open source for users in other parts of the world. 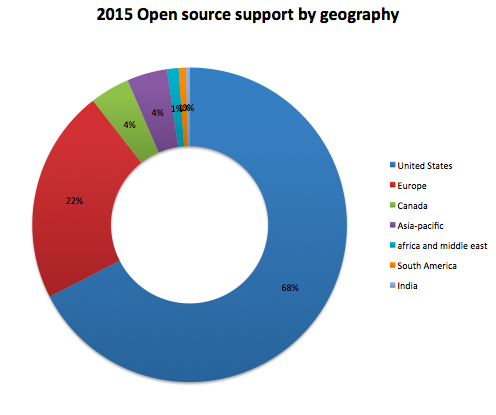 * These numbers might not exactly match those in ISC’s audited financial statements for 2015 and 2016. These are 12-month contracts for which we recognize revenue on a monthly basis as we deliver the services. This analysis was based on the 12-month value of the contracts we signed in each year, and was not adjusted to recognize the exact number of months of revenue realized in each calendar year.