Over the past five years, we have taken, on average, 32 days to publicly disclose a BIND vulnerability, from the time we receive the first report. 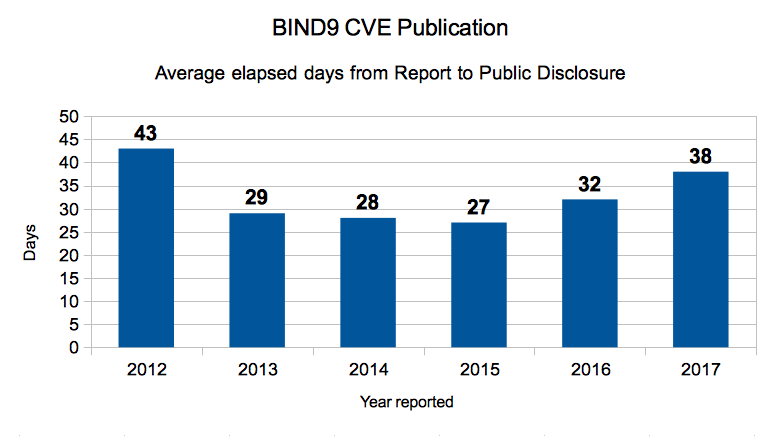 Typical steps from report to disclosure include:

An average of 32 days to get all of that done is reasonable. Sometimes it takes longer, often because we are waiting to bundle several issues together, or to avoid announcing right before a holiday.

What about the outliers buried in that average?

It is generally regarded as unresponsive to take more than 90 days from report of a vulnerability to publication. We have exceeded that only once in this period, in 2012, when it took us 98 days to disclose CVE-2012-5688, “BIND 9 servers using DNS64 can be crashed by a crafted query.” This report came from someone who was using heavily modified code, and it took a long time to find and identify the problem in our source.

Public disclosure notices may be found in our Knowledgebase, in the section headed “Security Advisories” under each ISC product.

Here is the source data for the chart above.

This post was updated after initial publication, to correct an error in the publication date for CVE-2017-3136. Publication of CVE-2017-3136 was originally scheduled for 8 March and was delayed when we received the two later vulnerability reports; all three were subsequently released together on April 12, 2017.