The basic BIND 9 memory management object is a memory context: the application can have as many as is practical. There are two reasons for a separate memory context: a) logical separation - this includes both separate accounting, and different configuration, and b) contention and speed - access to a memory context pinned on a specific thread will not be blocked by different threads.

The configuration option max-cache-size only affects the memory context in the cache and ADB (address database). All other memory contexts are unconstrained. This means setting the max-cache-size to 100% would lead to the OOM Reaper finding your BIND 9 process and killing it.

There are two reasons for this:

BIND 9.18 uses less memory than 9.16, similar to the memory usage in 9.11. The part that sends and processes outgoing DNS messages (server side) was refactored to use the new networking code and therefore uses half as many threads as BIND 9.16 used.

Our general recommendation for all deployments is to use jemalloc if possible. You can use jemalloc with BIND 9.16 by forcing the linkage via extra LDFLAGS (./configure LDFLAGS="-ljemalloc" should do the trick).

Measuring real memory usage can be tricky, but fortunately, there are some tools to help with that.

You can use this attached memory-json.py script to parse the statistics channel output to receive following data (this is from main branch):

The rule of thumb is “Don’t use the ‘top’ command” - there are better tools that are less misleading. There are two tools that are easily available on modern Linux systems - pmap and smem.

pmap provides detailed statistics, but can be too chatty - the basic usage is pmap -x -p <pid>. It prints information about all pages used by the program which includes shared libraries, the program itself, and the heap. The important number is the last one, “Dirty” - it shows the memory “used” by BIND 9.

smem provides fewer details, so if you want only a single number, run smem -P named and look for the USS column - this provides the information about memory used by the program sans the shared library. The PSS column adds shared libraries divided by the number of programs using those libraries, and RSS is the normal Resident Size.

BIND 9 uses several external libraries - OpenSSL, libuv, libxml2, json-c and possibly others. All these also need memory from the operating system to operate. The difference should not be large, but it’s also not negligible. If the difference between the used memory reported by the internal statistics channel and USS is large (on a busy server), then congratulations, you’ve found a leak in an external library. (NOTE: BIND 9.19 - the development version - provides its own memory context for OpenSSL, libuv, and libxml2 if the library versions are recent enough.)

There’s quite a lot of churn in memory allocations and deallocations on a busy server, and memory gets fragmented - the default Linux allocator isn’t particularly good with the BIND 9 memory usage patterns. Using jemalloc is strongly recommended as it handles memory fragmentation much better and is also faster.

When compiled (or even linked using LD_PRELOAD), jemalloc can produce heap snapshots based on triggers (time, size, …). This can be later analysed using the jeprof tool to see where the memory went.

You’ll probably need to fine tune the lg_prof_interval and lg_prof_sample numbers (it’s log base 2) to get the desired file size.

After running the benchmark or a regular workload, you should end up with bunch of jeprof.<pid>.<m>.i<n>.heap files. Pick the latest and run:

More options can be found in the jeprof manual page. These must be interpreted with knowledge of the BIND 9 internals. That said, if you are reporting what you think is a memory issue, attaching output of the jeprof will certainly help. 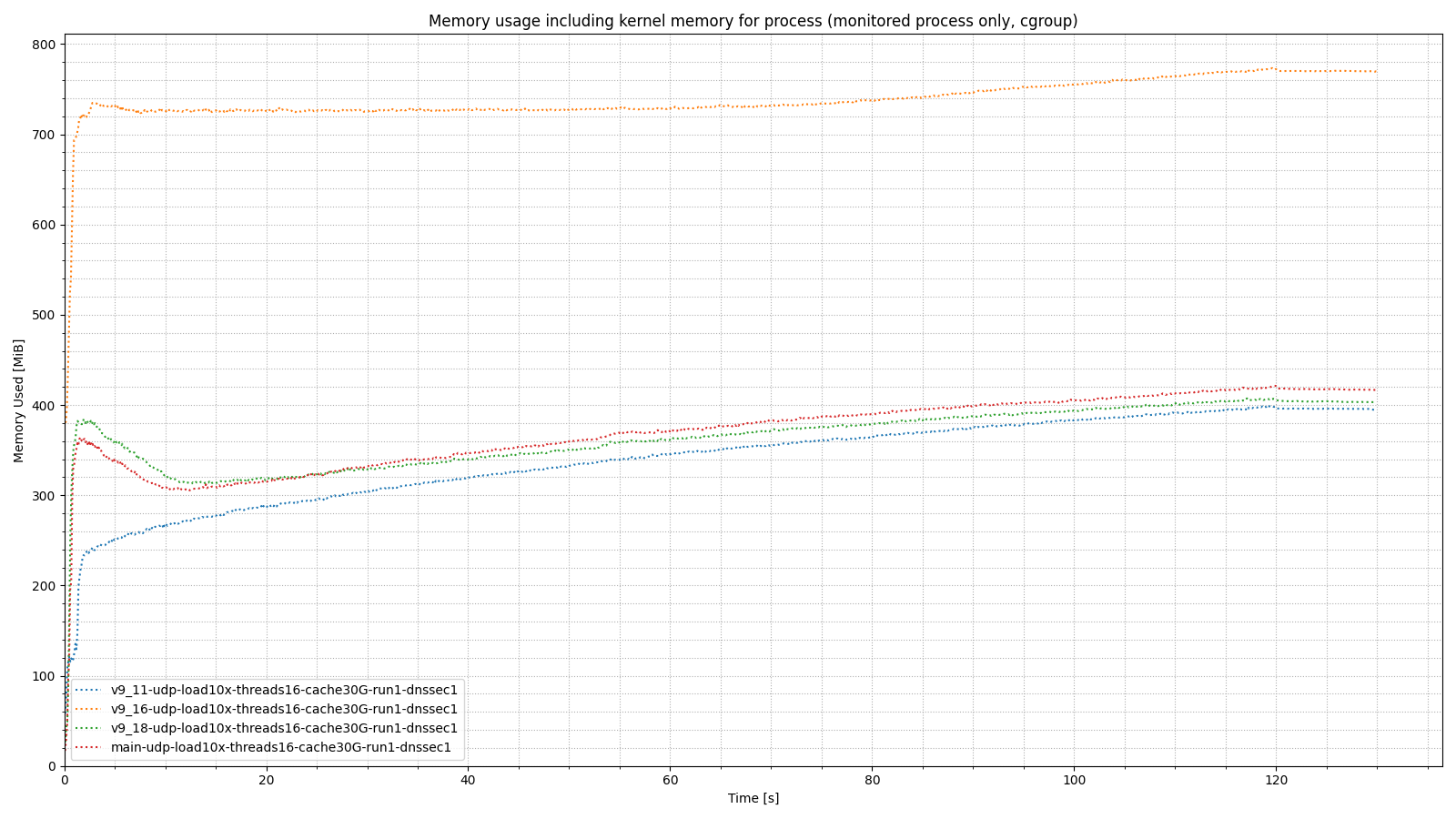 As you can see, 9.18 and 9.19 memory usage is in the same ballpark as 9.11. 9.16 uses twice as much memory (because it uses double the number of worker threads, as explained above). The following two graphs show that despite this improved memory usage, 9.18 and 9.19 actually have lower latency than 9.11. 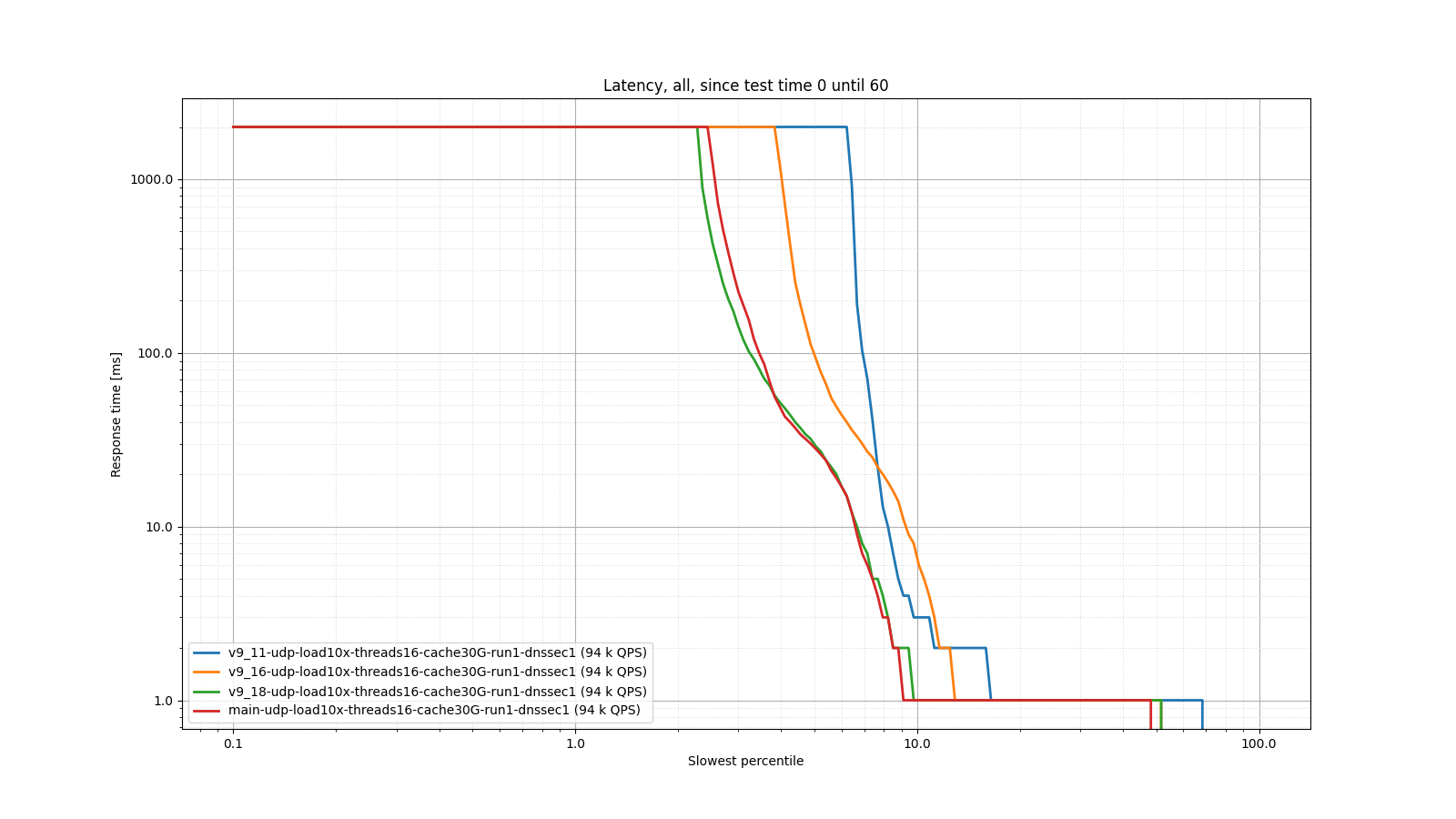 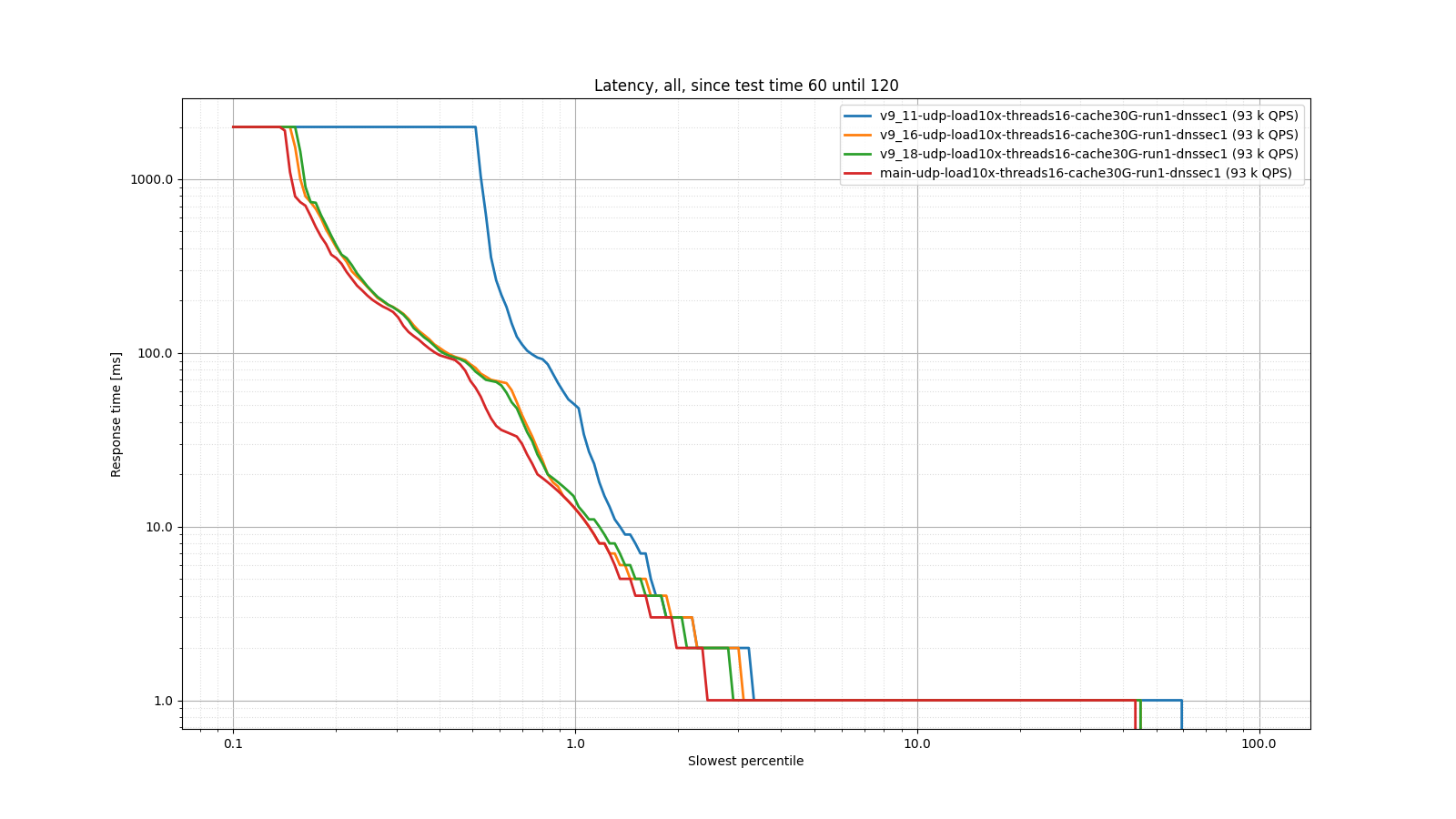 This blog was originally posted on the BIND 9 development wiki page. Check there for further updates if this topic is very interesting to you.